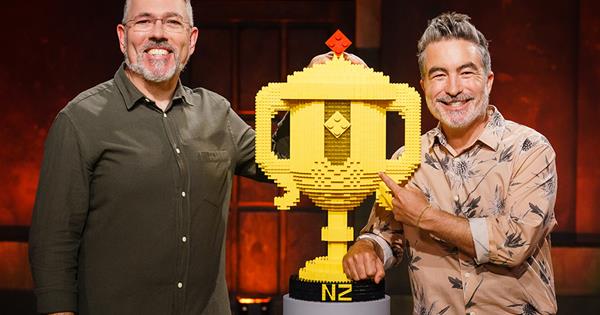 Lego fans will surely be excited to see their lego dreams come to life on TVNZ's reality show Lego Masters NZ! Hosted by Dai Henwood along with his sidekick - brickmaster Robin Sather - this is the first New Zealand version of the show which originated four years ago out of the UK.

Kāpiti climate change consultant Jake Roos, 43, credits these little plastic bricks with helping him through some really rough patches. "Lego building is my happy place – it's given me a lot of comfort in tough times," he enthuses. And it's the same for Pahiatua IT expert Glenn Knight, 45, who says, "It helps me deal with stress and has improved my problem-solving skills." Glenn isn't a fan of reality TV, but buddy Jake, who he met at a Lego show in 2016, convinced him to sign up and now he reckons they could win the show, saying, "Jake is fantastic with movement and technical building, while I'm great with detail and storytelling. That combination and our teamwork gives us the edge."

A keen fan of the Aussie series, Dunedin student Georgie Palmer, 19, applied for the Kiwi version within an hour of the show being announced. "The main reason I wanted to be on Lego Masters was the brick pit – honestly, who wouldn't want access to 2.5 million bricks?!" she laughs, adding that she asked her dad, Māpua engineer Andrew, 49, to be her building buddy because of their family dynamic. "We're 30 years apart, so we've got such different life experiences to draw inspiration from, plus we have plenty of top-tier banter," she explains. Andrew adds, "We each have complimentary skills and strengths, and work really well together as a team."

"Lego building has not only shaped my life – it's saved my life," says Gisborne entrepreneur and father-of-three Jonathan Samson, 44, who says the mindful practice has helped him "survive the mental and physical challenges" he's had to face. This includes the death of his beloved dad when he was just 18, struggles with depression and being diagnosed with the deadly cancer lymphoma. Upper Hutt therapist Daniel Mulholland, 46, who met Jono at a 2017 Lego event, also credits the bricks with helping his mental health, explaining, "I've used building as a form of therapy during my ongoing battle with PTSD. It's something I work on every day and Lego has become part of my daily life."

After meeting through mutual friends five years ago, executive assistant Emily Laing, 28, and vehicle refinisher Liam Hagenson, 30, became besties and flatmates in Pukekohe, where Emily helped Liam rediscover his childhood passion for Lego. Emily has since moved to Southland, but their strong bond remains and she reckons it'll make a "big difference in the competition", adding, "We'll build amazing things!" Meanwhile, as well as the Lego Masters trophy, Liam hopes the show might help him win the heart of his perfect woman. He describes himself as "New Zealand's most eligible bachelor, a country-living, car-loving bogan dude who enjoys writing, acting in theatre and Lego". Any takers?

Christchurch couple and longtime Lego fans Amy and Adam Richards have been married for 11 years, but they've only recently started building together after becoming hooked on international versions
of Masters. A mum to sons Lincoln, seven, and Elliott, five, accounts executive Amy, 38, says, "I like to build things that will make our boys happy. I think about what they'd play with and modify to add personal touches." The kids' playroom has already turned into a Lego build room, adds computer programmer Adam, 41, "but it's now at the point where almost every room in the house has Lego bricks in it. We might need to get rid of some furniture to make more space!"

Christchurch mothers Emily Fryer and Sarah Mosley both grew up loving Lego, but they only really became addicted to the bricks after having children. Having met through their eldest kids five years ago, this will be the first time the pair have built together, but objects conservator Emily, 41, reckons they've got the girl power to take the trophy, saying, "Being an all-female team gives us an edge. My awesome teammate and I have some crazy ideas!" Fitness instructor Sarah Mosley, 40, agrees, "Emily and I both have the creativity, the ability to think outside the lines and a quirky sense of humour that helps create interesting pieces."
Lego Masters NZ premieres 7.30pm Monday 9 May on TVNZ 2.