‘I WANT TO BE A LEGO MASTER’ 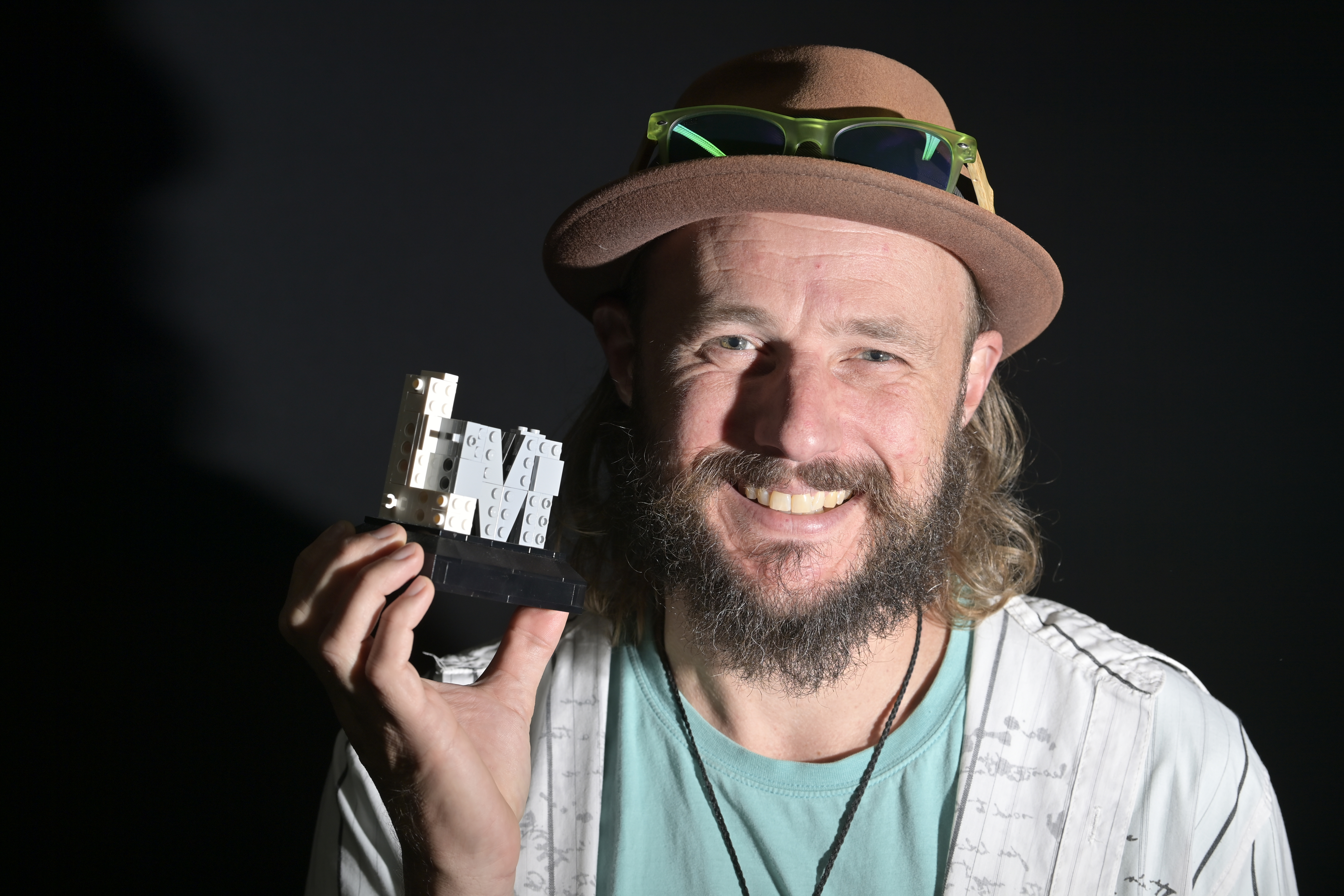 by Jack Marshall
'Taken over by the brick'. 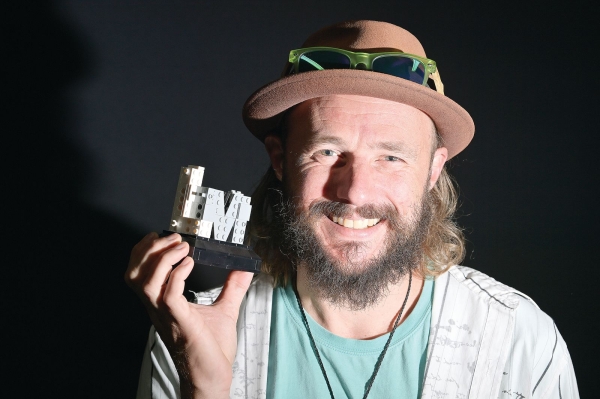 Jono Samson puts his Lego obsession down to swallowing a piece of the plastic building blocks when he was a kid. The Gisborne man takes his passion to a new level from Monday in the inaugural TV series of Lego Masters NZ. He is pictured holding an exclusive mini “LM” set given to him after going on the show. There are only 500 of these in the world. Pictures by Liam Clayton 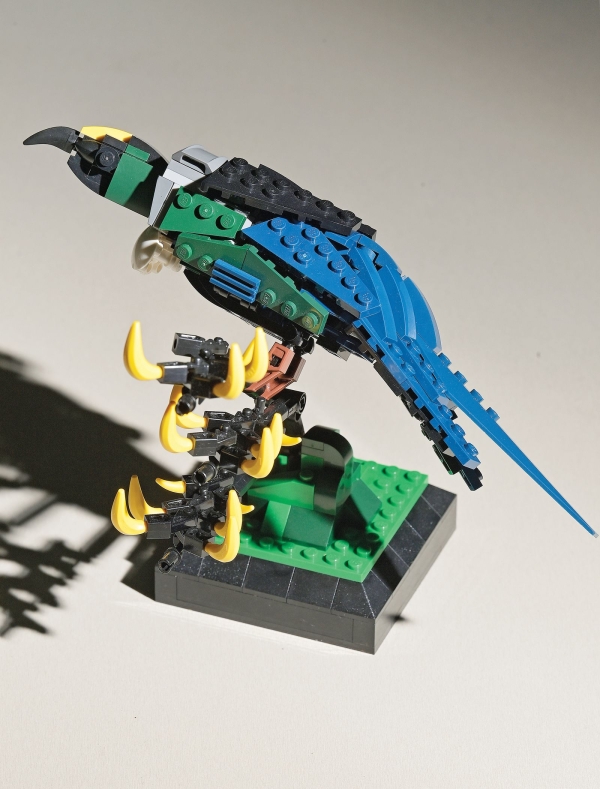 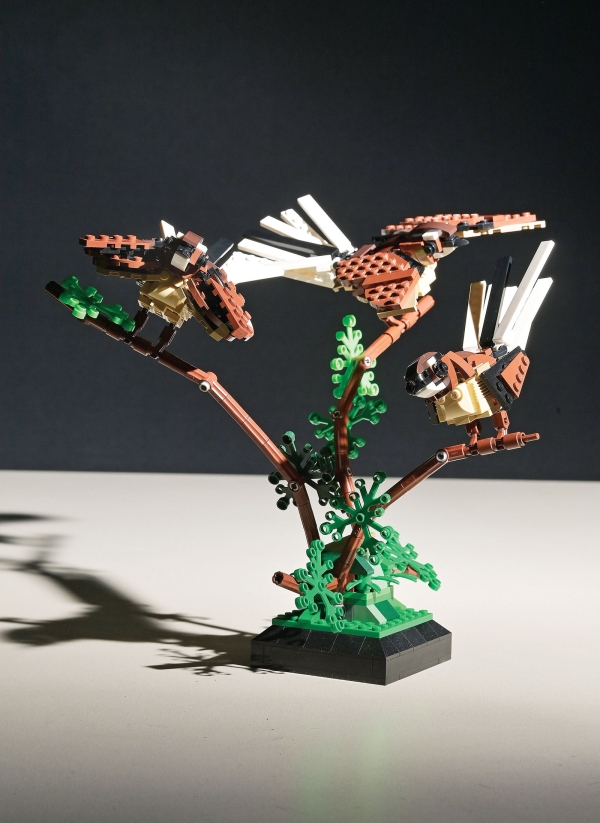 BRICKS CAN FLY: Lego Masters NZ contender Jono Samson has started a birds series, creating native birds like the fantail and Tui, then selling them online. Pictures by Liam Clayton

Brick by brick Gisborne’s own Jonathan Samson has been building up for tomorrow night when he hits the television screen for Lego Masters NZ.

Jono and his brick buddy Dan Mulholland from Upper Hutt will have their imaginations and building skills tested against five other teams in New Zealand’s first television Lego “brick-off”.

“Seeing the shows from overseas I always wished it would come to Aotearoa. And when it did it was a no-brainer. I had to play.

“I want to be a Lego Master,” Jono said, not giving away anything when it comes to what happens in the show.

Jono is a Lego super fan.

“When I was really little I made the mistake of trying to bite a piece of Lego off another piece of Lego and I ended up swallowing it,” said Jono.

“I think it got absorbed into me and I got taken over by the brick.”

Growing up with three younger sisters, Lego was how Jono escaped as his siblings were all into tap dancing.

“Part of my escapism was going to my Lego room and doing what I wanted. I built Lego right up until I was told I was too old for Lego — at about 16 or 17. I stopped playing for a long time.”

When Jono reached 30 he thought it was time to go back to the blocks.

“I realised that I was big and ugly enough to decide whether I was old enough to still be playing Lego.

“I saw this really cool set of a helicopter with dinosaurs and I thought, ‘How can I resist?’”

His hobby began to get serious in 2014 when he got noticed by professionals in the business.

After his train driver father Bob passed away, Jono decided to capture a memory of his dad in bricks.

“When I was a kid we used to travel the train track up and down the Coast. There was one piece of the gorge that it used to go through. There was the terrain, the train, the track and water, and I just wanted to capture it in Lego.”

In 2014, while building the piece, Jono got a call from Toyworld in Napier — his nearest Lego dealer — which was having a Lego day.

“I had revolving laybuys there.”

The event was a who’s who of the Lego world, including Australian Ryan “The Brickman” McNaught — one of only 21 Lego-certified professionals in the world.

Jono decided to take his gorge and train piece to the show and got a fantastic response. Hundreds of people admired his work and even The Brickman himself was impressed.

Jono and Dan have both had battles with mental health and Lego has acted as therapy — something Jono would like to share with others.

When Jono saw TVNZ was calling for applications for Lego Masters NZ on social media, he instantly messaged Dan and the dynamic brick-building duo was born.

“When I left for Lego Masters, I was a middle-aged guy playing with a kid’s toy,” Jono said. “When I came back I felt like I was a Lego artist.”

“It is very validating as an art form, as an outlet of expression and mindfulness. It keeps me creative and creating the life I want.

Jono said the experience was a privilege and he could not wait to see the look on his three kids’ faces when they watched the show.

“My kids these days only look at screens, so now I’m able to reach them through a mechanism they can understand . . . maybe I can throw some life lessons in there they can pick up along the way.”