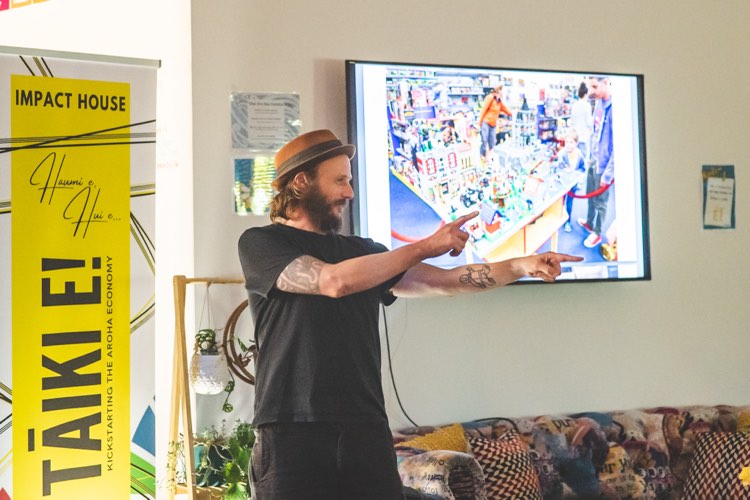 ko Jonathan taku ingoa, I am a father, a misfit, an entertainer, a computer scientist, a videographer, a writer, a comedian, an auteur, a free spirit, a photographer, a creator, an entrepreneur, a polymath and a total brick artist.

Born and raised on the East Coast, my Grandfather on my dad’s side was a builder who helped construct the parliament buildings and built the Cake Kitchen in Ormond Road for my Grandmother to create food for hungry workers.

My earliest memories of LEGO are building trains with my dad when I was very young.

I played with LEGO my entire childhood. Playing out stories with bricks. As I got older I somehow got it into my head that LEGO was for children and I stopped playing.

I moved to Wellington around the time my father died when I was 19. I hadn’t really decided what I wanted to do with my life and was pretty good at computers so I pursued jobs in IT while performing comedy, managing a band and appearing as an extra on Lord of the Rings.

In my late twenties I headed to Auckland to go to Film School and ended up working in television, movies for a bit, appeared on a reality TV show and started my first company making music videos and filming multi-camera cultural and performance events.

When I reached my early thirties I came back to Tairawhiti and owned Rainbow Fast foods for a while, up until the recession. I ended up working in retail at EB Games and Harvey Norman. Meeting my wife and having my three wonderful boys.

I decided I was big enough and adult enough to decide if I could play LEGO by myself after I saw an awesome set in the window of a huge attack helicopter with a team of minifigs and dinosaurs. I mean, who could resist.

I found myself working for Fujitsu for a while until once again venturing out into self-employment. My LEGO hobby grew into a bit of a passion that led me to display art pieces and Toyworld Stores and LEGO shows and write for The Brothers Brick.

Unfortunately, I found it difficult to juggle my life, my family, my IT business and my mental health and nearly lost them all. After several years of depression, anxiety and dysmorphia’ I learned some hard truths thanks to Te Kuwatawata.

I was having trouble communicating to the closest people in my life and they were trying their hardest to understand me, but despite how much they tried they weren’t hearing me. I felt like I was losing my mind. My thoughts were spiralling out of control.

I lost my purpose, I lost my marriage, I lost my business, I nearly lost my mind and almost took my life. It was my hobby of playing with LEGO that kept me sane.

I moved to Wellington to get my head clear.

I met like-minded people and workshopped my idea.

I followed the breadcrumbs provided by Te Kuwatata that led me to the front of my own mental health. I thought about how I would leave the world better than I found it and came up with grablifebythebricks and bricks and purpose.

I’ve been on a journey inside my own mind and explored most of the nooks and crannies.

I looked at the things I was good at, I practised and got better.

I looked to the things I was bad at and learned to accept myself for who I am.

I looked at the things I couldn’t do and I learned how to ask for help.

I looked to the things I wanted for myself and I learned how to work towards them.

I started my amazing journey of self-discovery and now I’m addicted to life.

I can’t live without it.

I went from bits and pieces to bricks and purpose.

I ended up driving buses and missing my kids too much and came back home. Before too long I found myself doing my best. I tidied up my room and throughout it all to maintain my sanity and wrestle my thoughts into my own control.

I’ve been in IT since I was a teenager and I’ve seen first hand the effect the screens have on our minds. We need more mindful creators and less mindless consumers.

The realisation of the bricks and purpose was my way of undoing some of the damage these screens are doing to our lives and using the knowledge that I have attained to be the change I want to see in the world.

I want to leave this world better than I found it, I want to find more people who feel that way too and I want to create a world of infinite possibilities in the mostly analogue bricks and purpose.