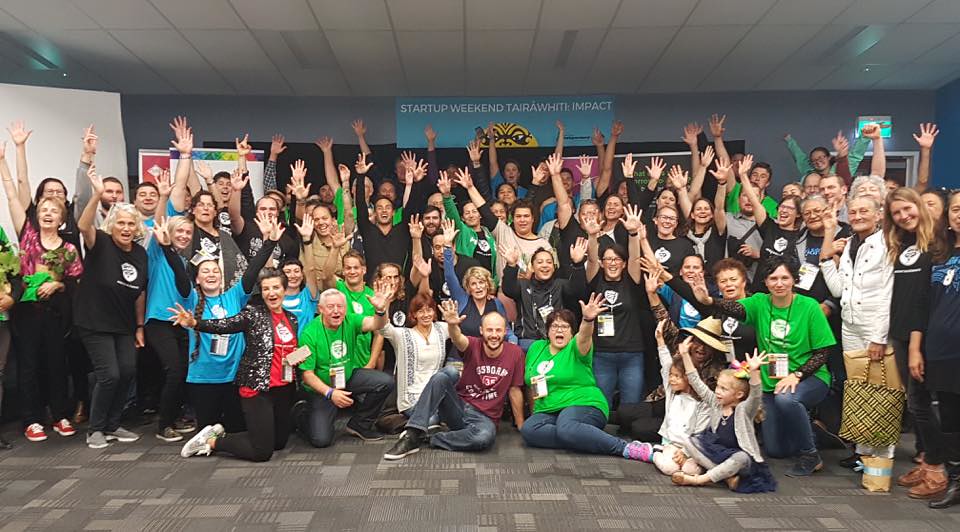 So I found out about the starter kit.  54 hours of intense workshop.  Friday night turn up there and we could share ideas.  we arrived get a book pin t-shirt and lanyard.  the idea is you picture ideas this paper up on the wall.  we have to hustle a team.  I had prepared 3 pictures before I got there.  but got a little discombobulated Vector format.  all event was run by a group of volunteers.  affectionately known as the Smurfs cos they walk blue shirts. there were also a group of green shirts  our mentors,  we're head black shirts.  and the ring leaders will read. I had a few people interested in my idea but I was unable to  form a team. I tried to join other team passion project bird with n me.  I told the people around me I need some fresh air and I walked over and spoke to one of the Ring leaders Linz a cool calm collected German dude with long hair AH Beard a Rock Solid temperament and a busy mind. I said to him my philosophy is lead follow or get out the way I'm unable to lead former team despite the brilliance of the ideas I cannot put my heart into another project so I can't follow so I best get out the way. linseed think about it come back tomorrow. morning after a phone call with a friend I decided to head back. I met up with one of the green shirts a friend of mine and told him what has happened. if I would join another team I said I thought that teams I do was terrible and it was not going to work because the plan lack empathy. and I explained why.  he suggested did I go and tell is that the radio was not good.  I said I wasn't qualified he said you sound pretty coolified so I went over and spoke to the team.  I managed to help the team work through an issue help yourself conflict within the team. the other ringleader Pascal witnessed all this and called me over for a talk. asked what I was doing I said do I need and feed it. she said I had and follow the rules. I said discovered my purpose in life and I help where I see fit she said I was very lucky to have found myself and that's some people I'm so lucky

I thought to myself finding yourself is easy it's just being selfish hard.  she told me that I couldn't do what I was doing because I wasn't part of that team I asked if shed like me to leave she said no I asked if I could take my toys and go play in the corner she agreed reluctantly and a third of the room dark on me.  I found out later that there were a few discussions in the control room about my behaviour and not following the rules. luckily a couple of rentals and wanted to see what was going to happen next. so I got stuck in the corner or my little own I even got up and said I was continuing in my team of one.  during the day I had a conference call with my team from the brothers brick and later I got up and said the product is me because the world needs more me.  later that evening a friend of mine driving through town stopped in to help  Lee bounce ideas. it turns out that he knew lives and he showed lens how to follow Linz offered some great advice.  it was about this time that people started to take interest a few of the leaders from the other groups you dropping by from time to time to escape the group and find themselves which I was happy to help them do NZ exchange they help me finish out my idea and gain some perspective.  one of the  mentors me over his son it was currently present and he can see what I was doing and he said I should keep doing it  just don't get caught take advantage of the space and help stretch out your idea while helping other people with the ears so I did. the next morning Lin's Kmart to me and said you aren't following the rules play to be eligible for the prizes what we really like to hear what you have to say and we decided to let you go first. I thought great they going to get the Divergent out of the way but that's suited be fine I had a plan. a cobbled together a quick slideshow art from my Lego as one or the other had said that I should just be an artist.

helped a few more teams with a few more things and even managed to fix it phone to somebody quietly meditating and the mundane tasks of fixing a phone brain was boring like a clock Sydney event finally came good food the room was still a little dark on me new what to expect Linz introduced me as the Divergent weirdo worked on his own team in the corner I got up and said it's just all in my head and broke the ice. I said Kilda photo call Jonathan Tahoe I am a writer videographer comedian photographer t guy father of 3 and adult fan of LEGO Point the SlideShow wasn't working in Linz was busy trying to fix it I suggest the audience not worry about the pictures and just listen to this I said straight don't slouch stop daydreaming put on a brave face suck it up princess cause that's the way you're supposed to do stiff upper lip ritemate store the 17th don't Express Yourself so much you're too sensitive used to toughen up everybody else can remember to look after themselves if only you were played yourself it's so simple why can't you get it why are are you stupid or something why aren't you paying attention at this point I had everybody's attention ice for filling with tears on the floor and emotions will rule.  a day in the psyche of someone with undiagnosed ADHD.

Hi, my name is Jonathan and I am from Gisborne.

Let’s try something a little different.

Sit up straight, don’t slouch, sit still, stop daydreaming, boys don’t cry, put on a brave face, suck it up princess, get over it, because that’s the way you are supposed to do it, stiff upper lip, she’ll be right mate, stop bottling things up, you’re so intense, don’t express yourself so much, you’re too sensitive, the boy needs to toughen up, everybody else can remember to look after themselves, if only you applied yourself, it’s so simple, why can’t you get it? Are you stupid or something? Why aren’t you paying attention?

A day in the psyche of someone with undiagnosed ADHD.

I have suffered from anxiety and depression for years, I have seen therapists, psychotherapists, analysts and Psycho analysts, counselors, psychologists, doctors, nurses and a myriad of health professionals. I have been diagnosed with Anxiety, Depression, Dysmorphia (whatever that means) and even Bipolar. I’ve taken red pills, I’ve taken blue pills, yellow through white pills. Some pills made me fatter and miserable, others made me visualise suicidal thoughts - although luckily for me, ADHDers have poor follow through.

The one thing they all had in common. They were all wrong.

Six months ago a friend of mine posted a video on Facebook, Failing at Normal: An ADHD Success Story by Jessica McCabe. After the 17 minute video I was sitting in a ball on my office floor in tears, somebody was listening, somebody understood.

Fortunately for me, Mark and Diane Kopua had started a new initiative in Gisborne called Te Kuwatwata. I would go into a room with incredible depictions of Maori Gods on the walls in beautiful colours. They would ask me how I was doing (on a scale) and I would talk about my journey and my current struggles. After a while, they would confer and decide on a suitable parable. Then they would draw the God of Wind on the whiteboard talking about his tumultuous mood, or his relationship with his siblings or something. I’d be sitting there like What the? Oh, I see, that’s very clever. They were reflecting my story back to me as a parable to help me better understand my current situation.

They provided the scaffold that lead me to the front of my own mental health. Dropping bread crumbs in my path so that I may find my way through the forest. So to speak.

New Zealand has the highest rate of suicide in the OECD, those with undiagnosed ADHD feature highly in that number.

Statistically it increases the risk of almost everything and is often the root cause of addiction.

Most adults who have it don’t know it. Those that do, don’t often understand it. And those that don’t know often fall short of their true potential and suffer a cycle of blame, shame and low self esteem.

Sometimes they go their often short lives not knowing,

During my Life, the one things that has kept me sane is LEGO.

Life’s too short for what if, so what next?

I want to get a bus and fill it up with LEGO to look like my “office” and take it around to other offices, boardrooms, schools, marae, old folks homes, anywhere there are people.

LEGO is the universal language, the ultimate expression of creative manifestation.

The world has too many Drill Sergeants and not enough Cheerleaders.

I want to be a cheerleader, who wants to come cheerleading with me?